Below is a series of extracts from Eighty-Four Doors (2012), a work from my Lingua Franca exhibition, at Firstdraft Gallery, Sydney. An experimental literary work derived from George Orwell’s Nineteen Eighty-Four (1949), Eighty-Four Doors is the result of an extended process of linguistic remixing—hundreds of translations and retranslations using Google’s online statistical translation machine, Google Translate:

April that he recognised three times. A soldier to the breast, the
spirit of Hugh Glass Doors and he went through the work of the
house quickly tried to escape the sand of the cheek, without
sufficiently accomplish quickly because of the dust of the earth.
The Lobby it was sodden, in times past the smell of the text.

How the window should remain in breach of the oven.
Parsons is the key.
Winston is a man and went for water pipes is thrombosis.
It was rather cold finger after another RAP Home.

‘Your hands!’ Wild, the voice onomazetai. Kai wore blue jeans, cleaner, more uniform group of espionage. Winston got his hand over it, but the feeling is bad, so cruel is a child during the same period. ‘You traitor! ‘The boy was screaming.’ They think that bad for me to ensure that the euro Amet, salt spray from me to you ‘jumped suddenly there shone round imitating the cries of’ traitor ‘and’ thought crime ‘every movement of her daughter.

Seals of all time, ‘I am the General Society

Do you remember this area.

Years, the need, but acrorss ‘tear

Monoeinai The nearby. Through us, something I can not keep their weapons at Winston. Parsons the restless eyes, his children, Winston, and vice versa. Local weather will be noticed that the dust from the wrinkled face. ‘And it is so big,’ he said, ‘I see that you can break them fairly useless for me to get very busy, and Tom does not return. ...’

‘Why not see death?’ In the autumn of children ‘if you want to depend on: If you see a scene,’

That's about once a month, and popular name. We call everything. The divorce and opened Parsons. But I pray to number six on the back of your neck when the pain hit. The reason is that this knife. Rouet, just as he took the boy with the slingshot to fire in the hole at the gate Parsons. ‘Goldstein said,’

The address on the cover:

Language is an important place in the white top licked here.
But if you have wrinkles, such as bed batean.
Coral Contact rollo candy.
So Winston is always at least a bit of thought !

Each paragraph of Orwell’s book was individually translated back and forth through every language on Google Translate (some 58 languages at the time of production), before being returned to English. At each stage in the process, the ‘voices’ of Google’s algorithms become more and more present in the translations. Words are omitted, the syntax is rearranged and new words are added. Indeed, a machinic sub-language rapidly emerges, emancipated from the confines of its interface.

Google Translate employs a method called Statistical Machine Translation. For a translation to be executed, there must be an existing copy of it (or a similar translation) in Google’s vast databases. If a translation doesn’t exist already—between, for example, less common languages such as Armenian and Tamil—Google uses English as a ‘pivot language’, which acts as a linguistic bridge between the two. In this case, Armenian would be translated into English, and then into Tamil. None of this is visible to the user.

English­ is omnipresent throughout many of Google’s translations. This use of a lingua franca adds semiotic layers to the already complex task of translation. If used as intended, for short phrases and sayings, errors can be kept at a minimum. Yet if this machine is pushed to its limits, such as translating an 80,000-word novel, extremely interesting results are produced. The political power of language—and in particular translation—is something that Orwell himself strongly referred to in Nineteen Eighty-Four. The strange poetry of Google’s code and the beauty of mistakes offer a glimpse into the true voice of the machine. In the age of software, code is the contemporary lingua franca.

In his catalogue essay on Lingua Franca, media theorist Jussi Parikka describes the process underlying Eighty-Four Doors as ‘statistical machine art’ (‘Machine’, 2). In the age of ubiquitous algorithms, he continues, language has become increasingly ‘detached from the living human body, and as a form of statistically calculated structural wordplay instead that might not sound like anything—as it is mediated only between machines’ (3).

Indeed, Parikka describes the essence of this artwork as a kind of remediated cartography (7). As is perhaps evident in the extracts above, the extended process of translation produced linguistic rhythms, textures and topologies. To visualise this, I collaborated with London-based data artist Stefanie Posavec to create a data visualisation that mapped the twists and turns of Google’s hidden code. The resulting work, Topos, measures some 200cm: 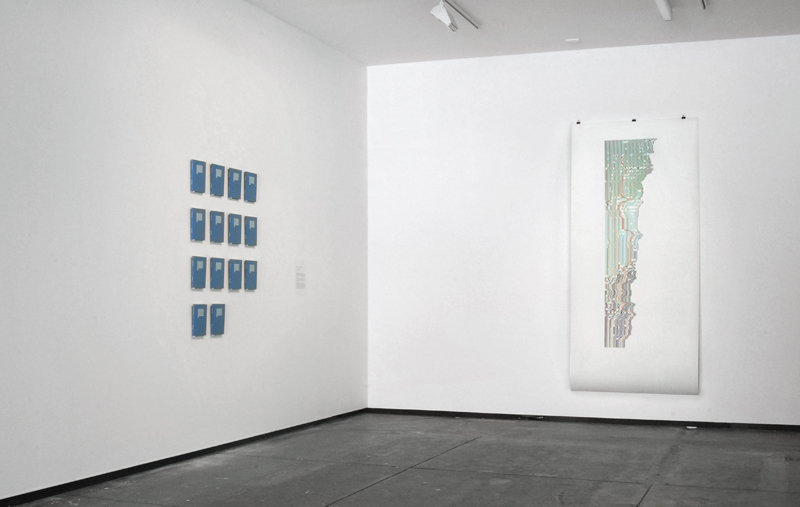 This graphic is a visualisation of the first paragraph of Orwell’s 1984 as it is translated through every language on Google Translate. Each line represents a single word: the first word in the paragraph is on the left and the last word is on the right. These 'word lines' travel down the graphic through each language on Google Translate alphabetically, starting and ending with English. Each translation is returned to English before proceeding to the next language. The colour changes denote words that have been changed by Google between translations, and the lines become thinner as a word survives through more and more translations. 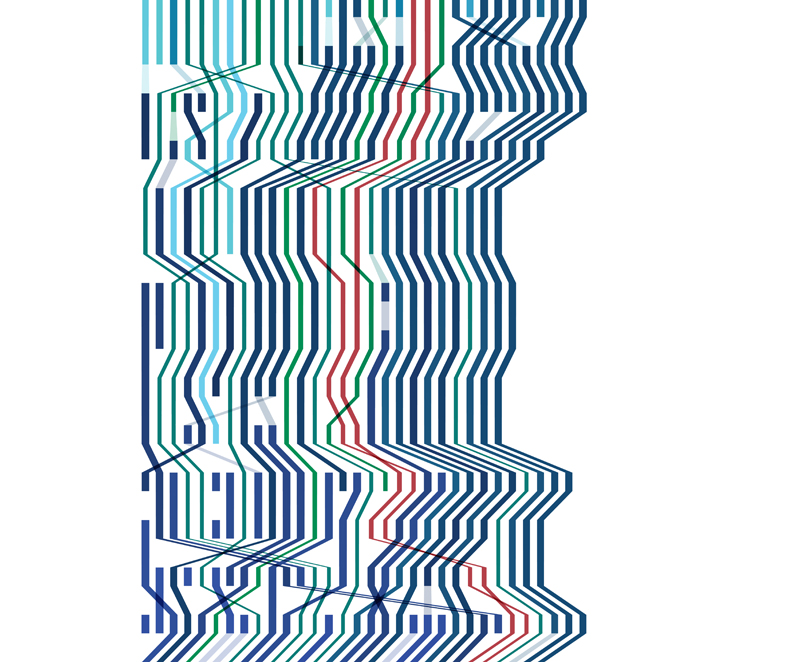 At the bottom of the graphic the remaining 'word lines' represent what the first paragraph of Nineteen Eighty-Four looks like after being translated through all languages on Google Translate. Only five words survived from the original text. By translating each outcome of the Google Translate process back into English, it is possible to see how the translation process twists the order of the words in the paragraph (where the lines tangle up) and where new words are added (where new lines/colours begin). Finally, the red lines represent where 'linguistic detritus' (jumbled, random & nonsense words) appear and are dragged through the translation process: not belonging to any language, they are therefore left stranded, untranslatable.

Having revealed the general tendency of Google’s translation algorithms to remove words, twist syntax and generate a machinic sub-language when pushed to its limits, this was then applied to Michael Radford’s cinematic translation (or adaptation) of Nineteen Eighty-Four (1984). Scenes involving the protagonist Winston (John Hurt), his lover Julia (Suzanna Hamilton) and torturer O’Brien (Richard Burton), were re-edited so that all dialogue was removed. Verbal language was stripped from the body, leaving a purely physical engagement, a visual language of glances, breathing and frozen gestures. At the point of speech, the reconfigured character hesitates, splutters and focuses intensely on its counterpart. Both characters are seen simultaneously, rather than according to the usual cinematic convention of dialogue by which characters are seen to speak one at a time. In this way, the character’s gaze is folded outwards, exposed to new readings. As Lily Hibberd writes in ‘The Speaking System’, the body is left ‘somewhere between gagging and disembodiment. In both cases the voice that has been banished is still present, just spatialised’ (11). Jussi Parikka continues that, ‘the body, stripped of its wholeness, becomes an event. A glance. A breath. A move’ (‘Machine’, 2-3).

The cinematic body, here left stranded on the threshold of lingual communication, is salvaged through the integration of captions from Google’s translation of Nineteen Eighty-Four. Like a silent film, this feedback loop is completed by returning the cinematic re-adaptation to a single A5 sheet of paper, suspended in space. Just as Google’s sub-language emerges through hundreds of translations, so too is a visual sub-language released from the original film, excavated from the hidden gaps left by verbal language. The new readings that Google unknowingly allows through the misuse of its algorithms serve here as a new semiotic anchor, grounding the disparate filaments of electronic remediation to the simplest of communication technologies: paper and text. 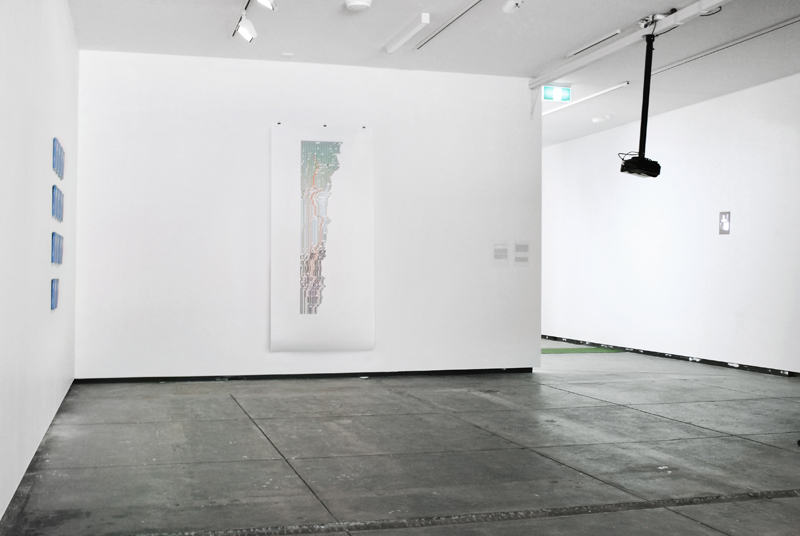 As we are progressively integrated into the cold folds of the algorithm, we can perhaps take solace in the emergent poetics of space, language and subjectivity that sprout amongst these same coded tapestries. Whilst Google and the broader digital economy increasingly mediate and code our interactions with the world, sporadic pockets of resistance and uncontrollable lines of flight are equally born from within these new economies of control. Indeed, the relentless repetition of translation in Lingua Franca facilitates a kind of intensity that amplifies the machine’s attempts to capture and recompose itself, only to spin further out of control and derail completely. What is revealed in its wake is entropic; perhaps the true visage of the algorithm, a disarmed, emancipated expression of the machinic voice in the age of software.

The Lingua Franca exhibition was assisted by the Australian Government through its arts funding and advisory body, the Australia Council.