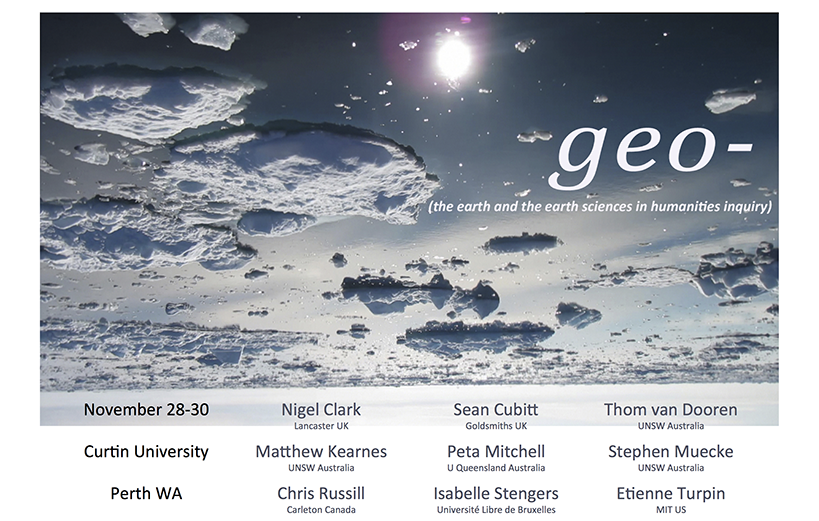 The development of new conceptual formations and cultural practices articulated with, by or through the prefix ‘geo-’ suggests a shift in the location or function of ‘the Earth’ in contemporary knowledge.

What status is accorded the Earth, for instance, in debates over the emergence of the ‘anthropocene’ as a (contested) geological epoch? Does the rising interest in ‘geophilosophy’ or ‘geoaesthetics’ signal a displacement of the worldly or the global in favour of the earthly? Is there a place in ‘the earth sciences’ for philosophical thought and cultural practice?

Or again: what role do geomediation processes (mapping, climate modelling, geoimaging, GPS navigation systems) play in the construction of the Earth as site, object or producer of knowledge? Do the technical and communicative potentials of geocoding and geolocation necessitate a reimagining of the interplay between the virtual and the physical, the ideal and the material? More generally still, how might reflection on media, technology and communication develop to address conditions and effects of the geophysical as much as the geopolitical kind?

Ctrl-Z’s geo- is a 2-and-a-half day symposium (Nov 28-30), brining together a select number of established and emerging scholars who are, in different ways, leading reflection on the significance or the problem of the Earth for understanding posthumanity, culture and technology. In its explorations of the cultural and conceptual dimensions to our planetary condition, geo- will test the capacity for humanities-based inquiry to stake a place within not only ecology and environmentalism, but perhaps also within the earth sciences more generally.

geo- is organised by Robert Briggs, Matthew Chrulew, Janice Baker and Francis Russell. Proceedings of the event will appear as a special issue of Ctrl-Z: New Media Philosophy scheduled for publication in 2017.

geo- is a Ctrl-Z event supported by the Centre for Culture and Technology and the School of Media, Culture & Creative Arts
@ Curtin University