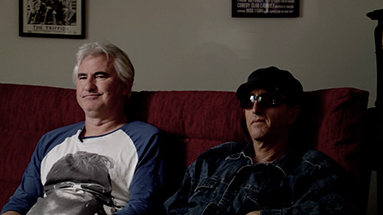 What might it mean to say that "ours is the time of the remix"? What happens to ideas, education, authority, media and everyday cultural practice in such a context?

In the early days of Ctrl-Z—when that grapheme named not a journal or an ideas network, but simply the first in an open-ended, irregular series of events—interested scholars, artists, professionals and members of the public gathered to discuss the possibilities of writing in the age of new media. Two such figures, Darren Tofts and Mark Amerika, joined Ctrl-Z editor Niall Lucy and film director Ken Miller to discuss the flows and eruptions of remix culture, to reflect on its technological and intellectual pre-histories, and to consider its implications for cultural practice.

Join Tofts and Amerika in the first of Ctrl-Z's media "publications", as they elaborate on phenomena of remix across a series of videos exploring "remix culture", "remix education", "remix authority", and "remix rights".

Darren Tofts is Professor of Media and Communications, Swinburne University of Technology, Melbourne. In 2011 he re-published his 1997 text (with Murray McKeich), Memory Trade: A Prehistory of Cyberculture, as an ebook (downloadable from 21C). His other books include Interzone: Media Arts in Australia (Thames & Hudson, 2005) and co-edited collections Prefiguring Cyberculture: An Intellectual History (MIT Press, 2003) and Illogic of Sense: The Gregory L. Ulmer Remix (ALT-X Press, 2007). He is currently working on two ongoing critical remix projects with Lisa Gye, The Secret Gestural Prehistory of Mobile Devices and Classical Gas. He recently published an interview with Ken Friedman in Postmodern Culture to mark the occasion of the fiftieth anniversary of the founding of Fluxus.

Mark Amerika is Professor of Art and Art History at the University of Colorado at Boulder and Principal Research Fellow in the Faculty of Humanities and Social Science at La Trobe University, Melbourne. His work has been exhibited internationally at venues such as the Whitney Biennial of American Art, the Denver Art Museum, the Institute of Contemporary Arts in London, and the Walker Art Center. In 2009-2010, The National Museum of Contemporary Art in Athens, Greece, hosted Amerika’s comprehensive retrospective exhibition entitled UNREALTIME. He is the author of many books including remixthebook (University of Minnesota Press, 2011) and a collection of artist writings entitled META/DATA: A Digital Poetics (The MIT Press, 2007). His latest art work, The Museum of Glitch Aesthetics, was commissioned by the Abandon Normal Devices Festival in conjunction with the London 2012 Olympics. More information can found at his website and his twitter feed..